Over the last decade, Netflix, the world’s largest online TV subscription service, has grown its revenues roughly 10 times, its earnings per share 15 times and its share price nearly 100 times. Netflix has become a household name and an investor favourite, earning its place among the market’s most high-flying tech stocks, the FAANGs.

But should investors expect the performance of the last decade to persist? In our first Investment Case post we put Netflix through our process and try to make an investment case for the stock.1

The Causality of Return

While many investments are made on the basis of predictions, narratives, or statistical correlations, our process is based on the causality of return, which is defined by the following mathematical identity:

This identity forms the foundation of our investment philosophy and process, so we’ve written about it on several occasions here, here, here and here.

While this framework can be applied in many different ways, one useful application is to identify companies where optimistic assumptions nevertheless result in weak returns, or where conservative assumptions result in strong returns. We believe Netflix falls into the former category.

Netflix is a high sustainable return business, and most of the investment cases in favour of Netflix are based on the premise that this will continue.

According to Bloomberg, analysts expect Netflix’s per share revenues to grow between 15% and 20% p.a. over the next 7 years. While this growth rate is slower than in recent years, it is normal for any high growth company to start tapering off as the base effects kick in.

Netflix doesn’t pay a dividend, so we would suggest that 20% p.a. is an optimistic estimate for Sustainable Return over the next 7 years. We’ll revisit this assumption shortly.

Since we’re measuring Sustainable Return in terms of revenues, we need to do the same with Revaluation. To this end we need to determine a “fair” Price/Sales ratio and compare it to the current multiple.

According to Bloomberg, analysts expect Netflix’s net margins to reach mid-teens within 5 years. This is in the ballpark for peer companies, but well ahead of Netflix’s own historic margins, which have averaged less than 5% over the last decade. Margins have reached nearly 9% in 2011 and again in 2018. We think a 15% normal net margin is a generous assumption to make at this stage.

Netflix currently trades at 106x earnings, a demanding multiple that requires significant revenue and margin growth to be justified. As growth and margins mature in years to come, it is reasonable to assume a lower exit PE. We’d consider 25x to be optimistic. This number is well above norms for more mature companies, even in the tech space. 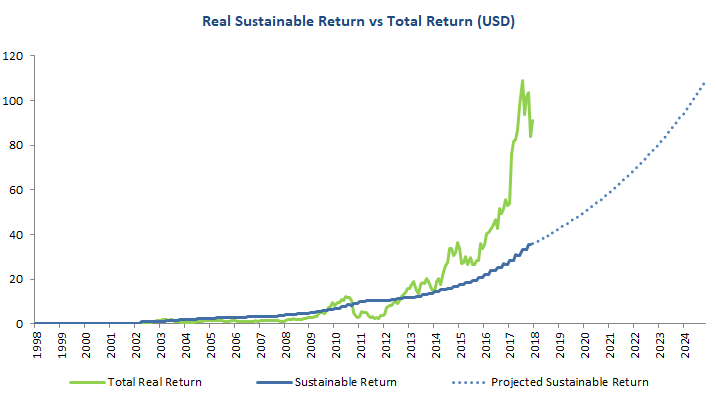 If this somewhat optimistic scenario plays out and Netflix trades at 3.75x revenue, Total Return will be 6% per annum.

6% p.a. is somewhat shy of the ~56% p.a. return delivered by Netflix over the last decade, but remember that Netflix’s PE ratio a decade ago was around 18x vs 106x today and growth was higher.

We doubt many Netflix bulls would be happy with 6%. Presumably they would assume higher growth, margins and/or exit PEs, which would be necessary to deliver a higher return, or otherwise they’re overlooking one of the causal drivers of return.

What about Financial Strength?

Let’s revisit that earlier Sustainable Return assumption, because we haven’t considered two of the most important causal drivers of Sustainable Return: Profitability and Financial Strength. We cannot simply rely only on analyst forecasts in this regard. We need to understand whether the causal preconditions of high Sustainable Return are present or not.

Profitability is a most important driver of sustainable return over time – it determines the trajectory. A profit can be returned to shareholders in the form of Yield or reinvested in the business for organic per-share Growth. Yield and Growth are the two constituents of Sustainable Return. Absent consistent profits, few businesses can deliver high Sustainable Return over long periods of time. Netflix has been consistently profitable since 2004, so no problems there at face-value.

In this regard we have two concerns about Netflix:

A decade ago Netflix traded on a 18x PE and had no debt. It subsequently returned 56% p.a. as it blew past expectations and rose to ever higher valuations.

Today the company is on 106x PE and has significant debt, with no free cash flow in sight. Valuations are higher, growth is likely to be lower than in the past, and financial risks to the growth outlook are far more significant. These causal preconditions are vastly different (and less favourable) than what they were a decade ago.

While returns higher than 6% p.a. are obviously possible for Netflix, we believe our inputs to be an optimistic base-case. Anything is possible, and there is a range of likely outcomes rather than one specific outcome set in stone. But investors should be concerned with probabilities, not possibilities. It is quite possible (perhaps even probable) for growth, margins and PE to be lower than our estimates, in which case return would be lower too. In the case of Netflix, the probabilities seem to favour disappointing outcomes over the next decade.

A good way to think about this is what Jim O’Shaughnessy describes as Base Rates. If you invest in 100 stocks with similar preconditions, some of them would do well, but how often would the overall portfolio outperform and by how much? Since these preconditions speak directly to the causality of return, we’d suggest not very often, and not by very much.

Ask yourself: What return would you be happy with from Netflix? What assumptions would need to hold to deliver that return? Are those assumptions probable? Are they conservative? What would the base rate look like for a portfolio of 100 stocks with the same preconditions? If the base rate isn’t good for the 100, is it worth speculating on the 1?

1 Note that this is just a high-level overview of a more thorough analysis.

2 Technically, Return = Growth + Yield + Revaluation x (1 + Growth), but since the Growth interaction with the Revaluation term is usually quite small, we just group it into Revaluation for the sake of simplicity. Our calculations always factor this interaction in though.